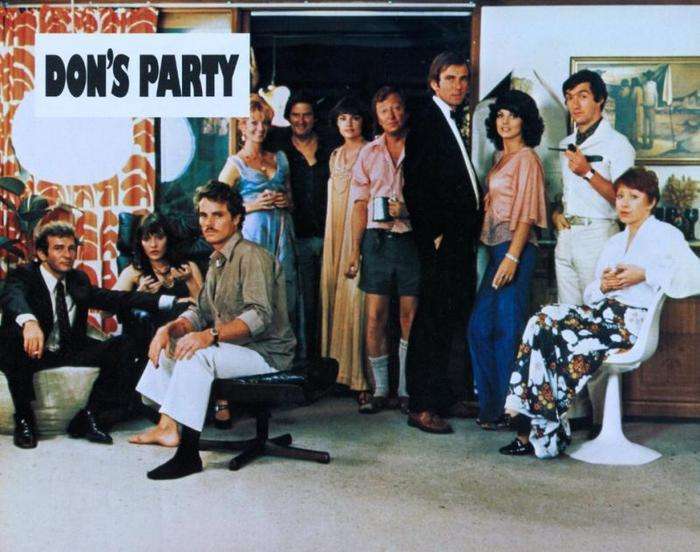 Don’s Party is the play by David Williamson you would preserve on a desert island if the world was laid waste. And David Williamson is the Australian playwright that you would go to if you wanted to know what Australians looked like, how they behaved and failed to behave. You can make a case for Jack Hibberd’s one hander, Stretch of the Imagination (brilliantly performed first by Peter Cummins and then, at least in his first go at it, by Max Gillies) but it’s Williamson who, from the 1970s, wrote viable Australian theatre as if it had a tradition stretching behind it and an electrically viable future ahead of it, each of these perceptions arguably optical illusions sustained by the masterliness of Williamson’s talent. In his 2021 memoir Home Truths he writes flatteringly of ‘that most penetrating and acerbic of cultural critics… who ended his assessment of my career with these words:

‘David Williamson – alas and alack as you may – is, God help us, the great Australian dramatist we somehow chose to have.’

There’s no resiling from it. The man who wrote The Removalists that eviscerating representation of police violence and who wrote that extraordinary comic and more than comic vista of the behind-the-scenes working of Australian Rules football in The Club ran the gamut of what was possible in theatre even if his very success, his inordinate dramatic facility meant that he was sometimes classified as facile and one of nature’s theatrical boulevardiers.

In fact, Don’s Party was initially despised by both ‘houses’ of Australian theatre.

‘Whereas the Melbourne Theatre Company,’ Williamson said, ‘had thought it wasn’t middle class enough, the denizens of the Pram Factory said it was too middle class.’

Fortunately, Graeme Blundell, the entrepreneurial genius of a period of rampant collectivism, created the Australian Performing Group and drove Don’s Party onto a Carlton stage out of sheer power of will and imagination. Michael Blakemore, one of the eminences of the English National Theatre under Laurence Olivier directed the play at the Royal Court. Williamson said Blakemore ‘had recently directed Laurence Olivier in what had been hailed as one of the greatest productions ever of Eugene O’Neill’s Long Day’s Journey Into Night’,  a man ‘who was, possibly the world’s greatest director’ and who could command ‘a precision of stage movement I’d never seen before’. The production was praised by the reigning critic of the time, The Guardian’s Michael Billington and Don’s Party went on to be filmed brilliantly and with a fearless command of its louche idioms by Bruce Beresford which will ensure that the dramatic language of David Williamson will always be available to us in the way the Elia Kazan film of A Streetcar Named Desire with Marlon Brando and Vivien Leigh has ensured that Tennessee Williams is an ongoing inheritance.

We know about the interplay of dialogue in plays from the films that are made of them. Williamson wrote The Year of Living Dangerously and Gallipoli for Peter Weir before they fell out, but these were adaptations and it’s in the films of his plays – Leo McKern in Travelling North, Nicole Kidman in Emerald City – but especially in the Beresford ones that we hear the very footfall of his dramaturgy.

And Don’s Party is a wizardly piece of work which shows to a dizzying and dazzling extent David Williamson’s command of one continuous action in which a multiplicity of characters – with a distinctive streak of unattractiveness which does not preclude sympathy – throw down grog like water, rut like teenagers, and cavort with a lack of restraint which is still shocking. The occasion is election night in 1969, the one where there seemed a better chance than there had been for 20 years that what was now Gough Whitlam’s Labor party would topple the Coalition led by Prime Minister John Gorton. The people who have congregated to party at Don’s place are a motley mob though they tend to be Labor supporters of a nominally intellectual bent which they wear not so much lightly as with an irony that doesn’t disguise their pretensions and insecurities. It is a devastating group portrait which is liable to shock the millennials and Gen Z’s who don’t quite realize how ingrained the ockerdom and sexism, the loutishness and raucousness of what Les Murray would have called this ‘new class’ of people. Those who have been to university but who seem at first glance like the greatest yobbos who ever inhabited ‘Ugly Australia’. 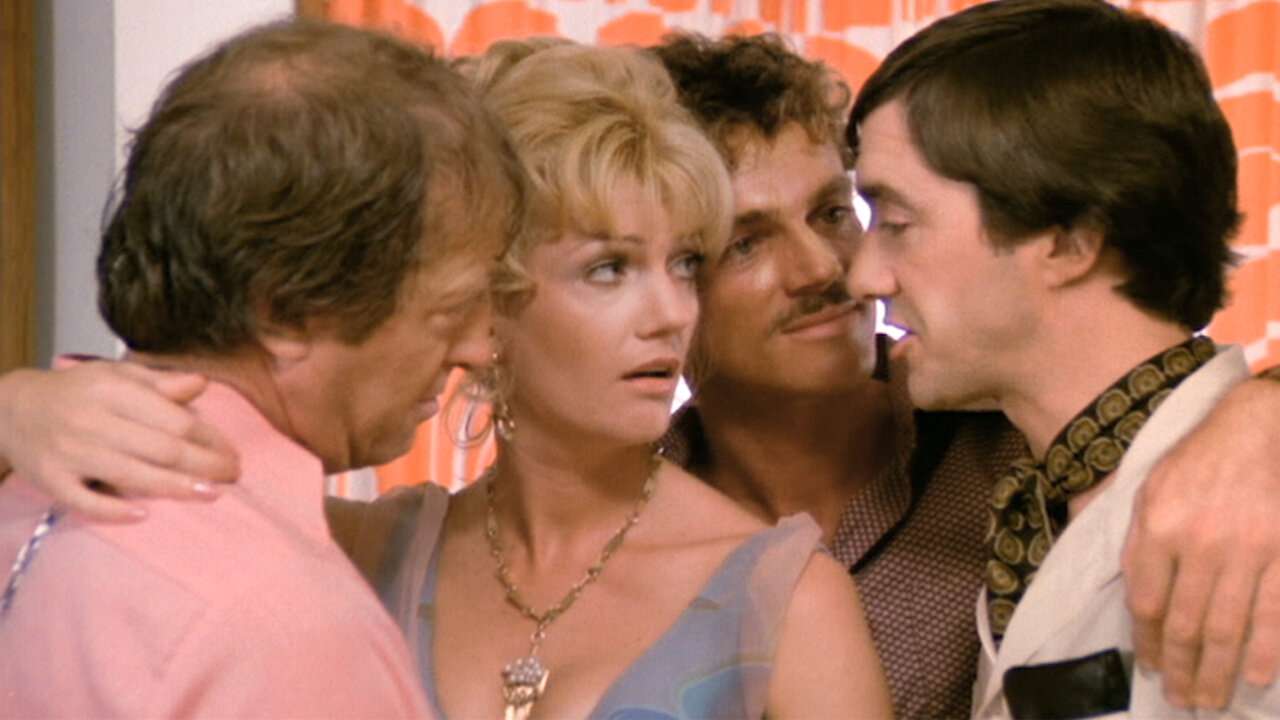 This is not quite fair because the humanity keeps shining through the cracks of yesterday’s bad manners and there are disconcerting flashes of poignancy in what turns into a melee which doesn’t have the concentration or the tragic plangency of Edward Albee’s Who’s Afraid of Virginia Woolf? but it does have its own kind of deadliness and cruelty. In Beresford’s film Don has a poster of Barry Humphries and in some ways Don’s Party confronts us with a Les Patterson world writ realistic. Don – in the film a good looking, ironic John Hargreaves, the reigning leading man of the time – is a schoolteacher who spent years on the great novel that never emerged. His mate and mentor is Mal, a sometime genius of psychology who now advises management on spin: this is slightly adapted in the movie where the character is played with grotesque grandeur by the veteran Ray Barrett. He worries about the size of his penis or, more precisely, the fact that he worries about it, (‘It’s not small. I just think it is.’) His wife Jenny has trouble coming but borrows money to build swimming pools and establish a suburban kingdom. Kath, Don’s wife, is likeable, put upon, and takes anti-depressants. She gives the speech about what it’s like to hang on the self-absorption of the narcissistic Don.

‘I had to creep around the flat while Donnie Genius was tapping out his earth-shattering novel that was going to place him, and I quote, ‘Amongst the ranks of the all-time fucking greats…’ Delusions of grandeur weren’t in the race! I had to wait seven fucking years before I was allowed to have a kid. Jesus Christ! I wasn’t allowed to do pottery until last year because it was so mundane. You shit me, Henderson. You shit me completely. I’m going to bed!’

And Williamson says with some pride, ‘Kath’s tirade struck a chord with most women, and it’s perhaps no accident that her rant is one of the most often used female audition speeches for drama-school applicants.’ No doubt this would not be unrelated to how powerfully Jeanie Drynan delivers it in the film. There’s also the all too plausible overheard quality of this gem about the sleazebag lawyer Cooley:

KERRY (to COOLEY): Any particular reason for the change?

COOLEY: I get more fucks when I say screw.’

Harold Hopkins is in his way a scream as Cooley though there’s the not insignificant question of whether young people will even find this funny. It’s a kind of Walpurgisnacht world Williamson creates peopled by cartoon figures who are also intimately recognisable types.

On the temperate sidelines there’s the Liberal voting accountant Simon – the Graeme Blundell role – who describes himself as neutral and his Coalition supporting wife – Veronica Lang won an AFI award for her screen performance and who sometimes does and sometimes doesn’t want people to take their hands off her bottom.

One of these is Mac – Graham Kennedy in the film – who notably gives a detailed imitation of defecating but also confesses to hiding in cupboards in order to take photographs of men having sex with his wife.

And so it goes. There’s a seductive painter – Candy Raymond in the film – who has great poise when she attempts to have sex with the sexist lawyer and who incurs – wouldn’t she? – the wrath of her dentist husband. 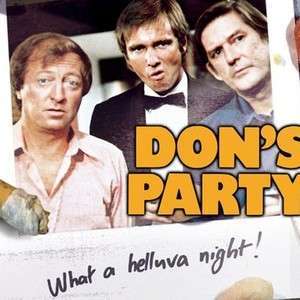 But Don’s Party is the kind of play where Don and Mal offer each other their wives from some barbarous pit of mateship. If it has one part Virginia Woolf it is in another way like a French farce by Feydeau except that everything is made grimy and real and full of a streak of desolation for all the beeriness and barbecues.

It’s a brilliant play that consistently teeters on the edge of asking the questions ‘Who am I?’ and ‘What art – in the name of God – can I practise?’

If you want to look at it in terms of the Australian way of life as the IPA understandably does with its canon, it is a consistent reminder that the free and easy sexual mores which in some ways tend to be taken for granted today were fought for sometimes grittily, and sometimes barbarically in the days of wife swapping and masculine self-centeredness. Though this is also a world inflected by feminism. But it dramatizes the horrors of what it presents humanely and empathically so that you catch yourself at the edge of tears as much as hoots of laughter. The characters in Don’s Party – set 53 years ago – would at the very least be in their mid-seventies now but their legacy is huge.