Dot and the Kangaroo

A plea for environmental conservation sits at the heart of classic children’s tale Dot and the Kangaroo which constructs a strong sense of national identity based on Australia’s unique native flora and fauna. Ethel Pedley explores the wonder and beauty of the Australian bush in captivating detail. Her key theme of living in harmony with nature is set against the backdrop of the settler nation-building project and foreshadows the ‘romantic patriotism’ of federation. While the story opens with the sentence ‘Little Dot had lost her way in the bush’ it soon becomes clear that Dot is not so much lost as found. It is here that Pedley leaves her literary mark on Australian culture. Just as Dot is found by the bush animals, the young reader is encouraged to find a unique Australian identity based on the nation’s distinctive landscape and wildlife.

When Dot and the Kangaroo was first published in 1899 it was described as ‘altogether Australian’ by the Sydney Morning Herald. But the book went on to play a defining role in forging an Australian type through literature in the leadup to federation. The story opens with Dot following a non-native hare into the alien bush where she becomes lost. After being found by the kangaroo the little girl begins her quest to ‘find her way home’ and is offered valuable lessons in ‘bush wisdom’ by the kookaburra, platypus, opossum, koala, emu and other birds. As she enjoys the protection of the native animals, Dot is educated about the difficulties they have encountered since the arrival of European settlers. After being deemed an ‘improved human’ by the kangaroo and the bush animal court she returns home and creates a haven for her new friends in her backyard. Dot is depicted as a transformative figure and the kangaroo her native muse who introduces her to the picturesque Australian outback. The stark contrast between indigenous and introduced species of both the animal and human variety are clearly presented. But this is softened by the possibility for unity between the groups signified by Dot’s growing friendship with the bush creatures. The conclusion is almost utopian with Dot and her family living in harmony with the native Australian wildlife. 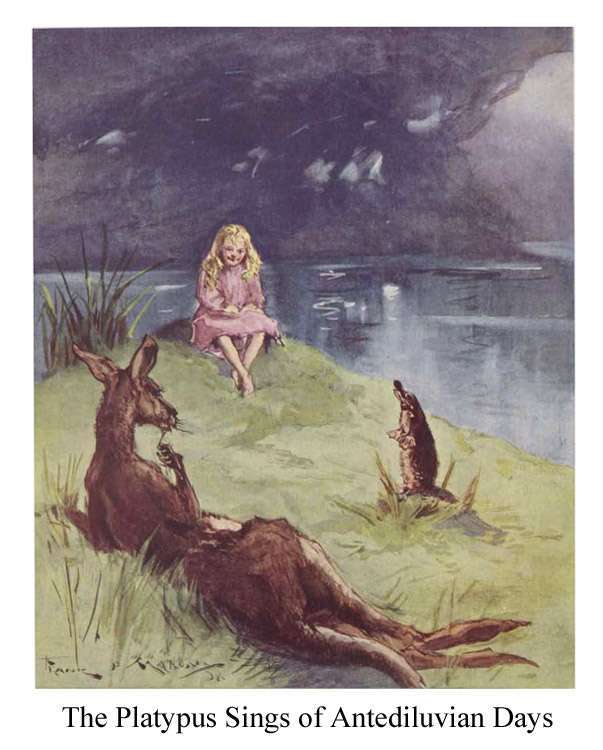 The fairy tale and fantasy elements of the text lend credence to the view that Dot and the Kangaroo contributes to the creation of a national myth around the Australian bush. Just like Alice in Wonderland the story starts with Dot picking flowers before being distracted by a hare and straying away from home. The ‘lost child’ trope is reminiscent of Hansel and Gretel and was popular in other Australian literature of the period such as Joan Lindsay’s Picnic at Hanging Rock. The story also contains Bambi-style messaging about the proper treatment of animals. Additionally, the scene where Dot meets the Platypus carries mythic qualities. Likened to ‘fairyland’ by Dot, the platypus’s abode is a place of peace and beauty at odds with his description of the brutality of scientific humans. The platypus embodies ancient wisdom and enlightens Dot on the destruction of natural habitats by settlers in the name of knowledge. However, he looks forward to a time when humans ‘cease to write books’ and move towards practical conservation efforts. His fellow bush creature the emu is less hopeful.

‘But the time will come, friend, [says the emu to the kangaroo] when there will be neither Emu nor Kangaroo for Australia’s arms; no creature will be left to represent Australia’s land but the Bunny Rabbit and the Sheep’.

Here Pedley emphasises the discrepancy between the ideological importance of the emu and kangaroo as political symbols and the dangers faced by the animals since European settlement.

Diana G. Barnes from the University of New England argues that Dot and the Kangaroo is designed to provide an ‘emotional education’ for young readers. After eating the ‘berries of understanding’ Dot starts to communicate with the animals. Her human-centric perspective is broadened to encompass the emotional lives of the native wildlife. This is defined by Barnes as ‘fellow-feeling with and not for animals’. The distinction here is important because compassion for animals can quickly become overblown sentimentality and pity which in turn hinders action. In contrast fellow-feeling with animals is more likely to result in positive change. Barnes suggests that the creation of human-animal ‘structures of feeling’ in literature makes ‘values stick’ for the reader.

Pedley’s strong moral and political message advocating for environmental conservation is a key theme. The link between sustainable practice and good citizenship is clear from the outset. An explicit appeal is made in the dedication at the start of the book.

‘To the children of Australia in the hope of enlisting their sympathies for the many beautiful, amiable, and frolicsome creatures of their fair land, whose extinction, through ruthless destruction, is being surely accomplished’.

It seems Pedley’s plea has been heeded. Conservation efforts have long been an important part of the development of Australia with over 600 national parks and thousands of forest reserves and protected areas set up across the country. To put this in perspective there are only just over 60 national parks in America and less than 20 in the United Kingdom and New Zealand. The creation of national parks in Australia recognises the importance of preserving native flora and fauna for all to enjoy.

Despite Pedley’s stinging review of white settler relations with the native wildlife, the environmental message found in Dot and the Kangaroo is not anti-human like many of its modern-day counterparts. When Dot says, ‘I wish I were not a white little girl,’ the kangaroo explains, ‘for some reason there have to be all sorts of creatures on the earth.’ She later continues: ‘It wouldn’t do for everyone to be a Kangaroo, for I doubt there would be enough grass; but you may become an improved human’. Later Pedley takes what could be seen as a radical stand against the racial eugenics’ movement of the late 1800s. Her rebuke is delivered by the kangaroo after Dot describes a group of aboriginals as ‘dreadful horrid creatures’ after stumbling across a corroboree on her journey.

‘But white Humans are not like that,’ said Dot.

‘All Humans are the same underneath, they all kill Kangaroos,’ said the Kangaroo. ‘Look there! They are playing at killing us in their dance.’

This exchange supports the idea of racial equality even if it is based on the idea that both groups are potential killers. Later the kangaroo makes an important distinction between indigenous people and settlers pointing out the first group hunt for food while the second group hunt for sport. Dot is gently reprimanded for her belief in the sub-human status of aboriginal people. The historical context within which the book was written reveals this was not a politically popular point of view. Legislation had been passed which allowed Protection Boards to remove children from their families resulting in what is now known as the ‘lost generation’ and many aspects of indigenous life were controlled by government bodies. Once the new Australian nation was formed, legal action was taken to exclude aboriginal people from voting.

Dot and the Kangaroo is first and foremost a celebration of Australia’s distinctive native wildlife and landscapes. The wonder and beauty of the outback is brought to life through the eyes of a child. Just as Dot is on a journey of discovery about the bush and the creatures who call it home, so too was the youthful nation of Australia on a journey of discovery – searching for a national identity. Dot’s eventual return home and ongoing friendship with the indigenous animals represents the forging of a new Australian identity based on the unique flora and fauna of the outback. It is fitting that Dot’s kangaroo will forever sit beside the emu on the Commonwealth Coat of Arms.

This appreciation of Dot and the Kangaroo was written by IPA Researcher, Brianna McKee, in 2022, specifically for The Genius of Australia.