This week’s episode of Australia’s Heartland with Tony Abbott was a special discussion between Tony and myself about the big issues facing the future of Australia.

Our discussion was based on a very significant piece which Tony wrote for The Australian last week about his vision for Australia’s future on the key issues of education, climate policy, population growth, and economic opportunity.

Tony argued that the radical new proposed National Curriculum should be vetoed by education minister Alan Tudge, that big politically-correct corporates have too much influence over debate in Australia, and that as we come out of Covid restrictions governments should ensure that population growth rates are kept at manageable levels.

In The Discussion I write about a landmark new research report by the Institute of Public Affairs released today which outlines the impact that a net zero emissions target will have on jobs.

And The Must Read is an important essay by Ed West, senior editor of UnHerd who argues that whoever owns society’s taboos comes to win.

This week former Prime Minister and IPA distinguished fellow Tony Abbott and I had a special discussion about Australia’s post-Covid future.

The discussion is based on a significant recent essay published by Tony where he outlined his vision for the future of Australia. Tony and I discussed why education minister Alan Tudge must veto the radical new proposed National Curriculum, the vested interests behind Australia’s high migration intake, and how political correctness in big business is undermining debate in Australia.

Australia has always been defined by its egalitarian nature, sometimes expressed as the “have a go” and the “fair go” attitude, which means that anyone should be able to succeed based on their own hard work and merit.

The promise of Australia was – and remains in much of the country – that if you are willing to work hard, play by the rules, and provide for yourself and your family and community, then you will have the opportunity to get ahead and enjoy a decent and noble middle-class life.

Australia became an explicitly and intensely classless nation, exemplified by the ease with which many recent migrants start their own businesses and set up a successful lives for themselves and their families.

It wasn’t long ago that a low-skilled migrant worker, with an elementary grasp of English, could gain a trade, start their own business, own a home, provide for their family, put their children through a decent local school, and have enough left over for a comfortable but modest annual family holiday.

This is why our mining, agriculture, and manufacturing sectors, and the communities which rely on them, matter so much to Australia’s future. That is where the Australian way of life is lived and the Australian character of grit and determination is best showcased.

And it is where economic and social opportunity for a decent, well-paid and stable job which forms the basis for a better life is found for millions of Australians.

“net zero emissions will mean net zero jobs for so many Australians in the mining, manufacturing, and farming industries.”

Australia is lucky to have leaders like Senator Matt Canavan who are acutely aware of the challenges facing Australia’s future, and who consistently mount the argument for the dignity of work, regional economic development, and important Australian values such as freedom of speech and democracy.

Today Senator Canavan made some important remarks to The Daily Telegraph about the proposal that Australia adopt a target of net zero emissions by 2050, “net zero emissions will mean net zero jobs for so many Australians in the mining, manufacturing, and farming industries.”

Senator Canavan went on to say “at a time when China is threatening other countries in our region we should be removing the handicaps that hold back Australian job creation. A net zero emissions target will just create more costs to do business in Australia.”

These comments were made in relation to a landmark research report released by the Institute of Public Affairs today which included modelling of the impact that a net zero emissions target will have on jobs. 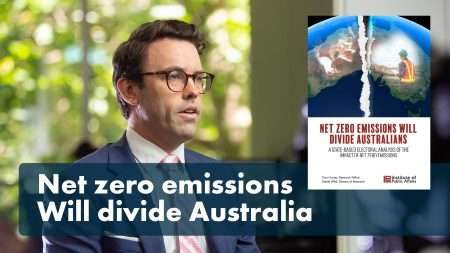 There is a similar division in NSW, for example between New England in regional NSW and Wentworth in the inner-city, and in Victoria between the Gippsland and Kooyong.

The report builds on earlier research by Cian released earlier this year, Net Zero Jobs, which estimated that across Australia a net zero emissions target would put up to 653,600 jobs at risk. Those jobs losses would be concentrated in the agriculture, mining, and manufacturing industries.

As IPA Executive Director John Roskam mentioned in his note to IPA members last week, Cian’s analysis was so important because it was the first to identity a very deep division in Australian society and within the federal Coalition government. 17 of the top 20 electorates with the most jobs at risk from a net zero emissions target are held by the Coalition, with six of the top 10 held by the Nationals.

Conversely, the Coalition also holds 12 of the bottom 20 seats with the fewest jobs at risk, all of which are held by the Liberal party.

This means that a small number of Liberal members of parliament from affluent, inner-city green-tinged seats are promoting a policy which will not affect them or the workers who live in their electorates. It will affect workers in regional and outer-metropolitan electorates who are represented by the members of the Nationals Party.

In other words, it is precisely those who will be most affected by a net zero emissions target who are the least likely to have a voice in the debate.

Today, almost all of the major institutions in Australia’s society – big business, the media, the majority of the major political parties, universities – support a net zero emissions target.

An exemplar of this is the comments published today by the CEO of Macquarie Bank, Shemera Wikramanayake, who said that governments needed to quadruple renewable energy production by the year 2030 to facilitate the “transition” to net zero emissions.

It says everything about corporate Australia today that these remarks were made at Macquarie’s “green investment group” two-day talk fest about climate change. So far, I have not read any remarks about the impact that these suggestions would have on the job prospects of a miner in MacKay or a farmer in regional NSW.

It’s easy being green when you have an annual salary of $18 million a year, which is around $350,000 a week. That’s about four times what the average Australian earns in a year.

But it is important to remember that corporate CEOs, politicians, and media executives come and go, but the values which underpin the Australian way of life do not.

Australia’s future is bright so long as we have leaders like Senator Matt Canavan. 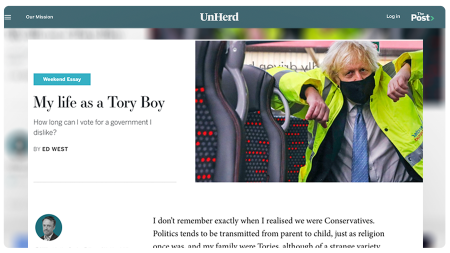 This week’s The Must Read is My Life as a Tory Boy by Ed West who is the senior editor of UnHerd. Ed argues that the most apt comparison between the West today and the last days of Rome has to do with the control of taboos in society. “Whoever owns society’s taboos comes to win, and Christians just believed with greater force that to blaspheme their God was an offence against public morals, while polytheists had stopped caring to defend theirs”.

According to West, today it is the progressives who by and large own taboos, “and those who offend the sacred ideas of race and sexual identity face the terror of being charged with impiety (or “cancelled” to use the secular term). Importantly, West notes that it doesn’t matter how many elections your side of politics wins, because if you don’t control the taboos you won’t shape the future.

About the Author: Daniel Wild

Daniel Wild is the Director of Research at the Institute of Public Affairs
Published On: October 8, 2021Categories: Read, The Australian Way Newsletter