It’s been an enlightening three months of discussions with former prime minister and Distinguished Fellow of the IPA, Tony Abbott.

This week’s episode of Australia’s Heartland with Tony Abbott is the final episode of the podcast’s first season. And it is a reminder of why Australia is so lucky to have someone of Tony’s caliber engaging in the big debates about our nation’s future.

The best part of this week’s episode is the final segment where Tony gives advice to his 30-year-old self.

Reflecting on his near three decades in public life, and his experience as a prominent minister in the Howard government, an opposition leader, and prime minister, Tony said ‘my instinct has always been to have a go.’ And ‘if your heart tells you that it is right, then give it a go.’

You can listen to the episode on the webpage here, or on Spotify, YouTube, and Apple Podcasts.

The Discussion this week is about the foundational role that sport plays in Australian society, and why the leftward drift of so many civic organisations is a threat to Australia’s egalitarian liberal democracy.

And The Must Read is by Jeffrey Anderson, president of the American Main Street Initiative, writing for The Claremont Review of Books about the ongoing cultural and political realignment in the US in the lead up to the 2024 election.

This week on Australia’s Heartland with Tony Abbott, Tony drew on his experience as minister for health in the Howard government (where he was intimately involved in pandemic planning) to advise on what governments should and should not do in response to the new COVID-19 variant.

Tony and I also discussed why sports stars, like new Australian test cricket captain Pat Cummins, using their platform to campaign on contested political issues is inherently divisive. Tony noted that sport is something that should bring us together as a community, but it is now too often a forum for political posturing which is turning Australians away from sport.

You can listen to the whole episode in your web browser here, or on Spotify, YouTube, and Apple Podcasts.

One of the major themes of my conversations with former prime minister and Distinguished Fellow of the IPA Tony Abbott is the ‘corruption’ of Australia’s major cultural, social, and economic institutions.

Corruption here is used in the sense of an organisation deviating from its original core mission to engage in political or social campaigning that may not reflect the views of its members.

The problem is not just that on many of the big issues facing Australia’s future – for example climate change, freedom of speech, and mass migration – government, big business, universities, and the media almost all sing from the same song sheet.

It’s a problem because an egalitarian liberal democracy like Australia depends on having a diverse range of institutions that can, firstly, bring together an otherwise disparate group of people and, secondly, ensure the multitude of views of Australians are reflected in public debate.

In between individuals and the government are the vast array of institutions, which collectively constitute ‘civil society’, where the bulk of our lives are lived and where we find meaning.

Religious, community and sporting organisations, RSLs, and local businesses, unions, and governments, are where we get to rub shoulders with people who live very different lives to us and who bring a different perspective.

It is at the local footy club or church hall that we learn to empathise with one another and tolerate those who have different views to our own. It is where we put a human face to someone who is on the other side of the debate.

Perhaps this is nowhere more apparent that in sport, which has always been the great equaliser in Australia and such a foundational part of our way of life.

Rich or poor, Catholic or Protestant or Jew, manual labourer or CEO, immigrant or sixth generation, Australians of all backgrounds could be found in the stands and cheer-squads of their local footy, cricket, rugby, or soccer team.

Buoyant in victory or despondent in defeat, a beer after the game at one of the many pubs and bars near the sports ground or stadium created a sense of shared commitment and passion.

Now, however, sporting events have all too often become parades for the ruling elite, who can enjoy full-strength alcohol sealed away from the masses in exclusive corporate boxes. Politicians, lobbyists, and the captains of industry and finance chatter among themselves as they peer down at regular fans who are subject to politically correct pronouncements and harassed by ‘behavioural awareness officers’ if they cheer too passionately.

“The danger is that when sports people use their sporting prominence as a political pulpit they turn people off the sport itself.”

This is why the appointment of fast-bowler Pat Cummins to be captain of the Australian Test Cricket team is concerning.

There is no doubt that Cummins is a terrific and talented player, and will continue to make an excellent contribution to the game.

But, judging by recent comments to the media, Cummins will become yet another high-profile sports star to spend a great deal of time telling his teammates and supporters what they should think on contentious political and social issues.

Cummins is a part of The Cool Down activist climate change group, which is a collection of several hundred sporting figures who are pushing governments and non-government organisations to ‘do more’ on climate change.

The group asserts without evidence, for example, that ‘the climate crisis and Australia’s intensifying extreme weather is threatening the sports and country we love.’

In a recent interview with The Australian Cummins similarly asserted that cricket ‘has a big footprint – we fly all over the world in jets, we’ve got big ­stadiums, play under massive lights, the fields use so much valuable water. There’s a lot we can do. Sport will be affected [by climate change], but cricket in ­particular, we are subject to the elements.’

Cummins also said he was concerned about ‘racial inequality’, but didn’t elaborate on what that meant in the Australian context.

The problem is not so much that Cummins wants to speak out on issues he cares about.

As Tony said to me in the most recent episode of Australia’s Heartland with Tony Abbott, ‘people are entitled to their views.’ And ‘if they want to tell us what their views are, then fair enough.’

But the danger, Tony said, ‘is that when sports people use their sporting prominence as a political pulpit they turn people off the sport itself.’

That’s exactly right. Millions of mainstream Australians who do not follow the politically correct on a range of social issues feel excluded when they are forced to endure pre-game lectures about climate change, indigenous affairs, or Australia’s history, culture, and national identity.

The reality is that there is – still – much more that unites us than divides us as Australians. Our shared commitment to freedom, democracy, egalitarianism, the dignity of work, and mateship are values which speak to us all as Australians regardless of our individual political differences, our racial background, or what we do for a living.

How refreshing it would be if more sports stars and cultural icons spent more time talking about all of the things that unite us as Australians, rather than what divides us. 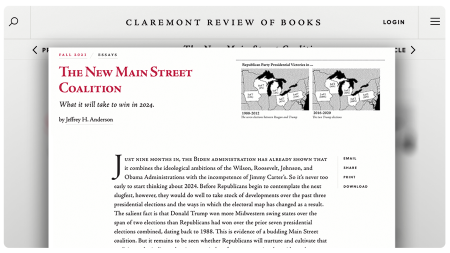 The Must Read this week is by Jeffrey Anderson, president of the American Main Street Initiative, writing for The Claremont Review of Books about the ongoing cultural and political realignment in the US in the lead up to the 2024 election.

Anderson argues that the future of the Republican Party is as a multi-ethnic and multi-religious working-class party that reflects the aspirations and values of ‘main street’ Americans – ‘It is often the case that good policy makes for good politics, and in many respects a Main Street agenda will be even more timely going forward than it was in 2016.’

What Anderson says about America could – or, at least should – apply to Australia, ‘At its best, a Main Street coalition is pro-American and possesses a healthy skepticism toward cosmopolitan elites. It embraces policies designed to make it possible for everyday Americans—regardless of income, race, or creed—to prosper.’