Best-selling poet, Bruce Dawe (1930 – 2020) has been acclaimed as Australia’s premier bard of the suburbs. A highly respected writer and educator, Dawe’s work was described by Les Murray – arguably Australia’s most important poet of the 20th century – as “wonderfully pitched so it will speak to people of little or great education.”

Published in the 1960s, Life Cycle is one of Dawe’s best-known works and is a prime example of his ability to speak to people from all walks of life. The poem takes the reader through the fictional life cycles of dedicated footy supporters, using the game’s vernacular and terms familiar to it: “carn”, “three-quarter time”, “barracking”, “hot pies”, and AFL (previously known as VFL) club nicknames. Dawe sprinkles the work with theological, literary, mythological, and military allusions, which make manifest and add depth to the poem’s light and humorous tone.

‘So that mythology may be perpetually renewed

‘like the voice of God booms from the stands

Ooohh you bludger and the covenant is sealed’

The elderly still loyally crying Carn … Carn … (if feebly) unto the very end,

Though he spent much of his life in Queensland, Dawe was born and raised in Victoria. His poem was written before the AFL era and is distinctly Victorian, even explaining via a tongue-in-cheek reference to the ANZACS that, due to footy, Victorians “will not grow old as those from more northern states grow old.”

Unpretentious yet learned, it captures the uniquely Australian and particularly Victorian penchant for treating footy as a religion. Ultimately a celebration of the community spirit footy engenders, the poem manages to critique an overly religious dedication to the sport while also functioning as a paean to the value of hope.

Despite the plethora of alternative sports now available since Dawe wrote Life Cycle and despite the AFL’s falling audience numbers in 2022, new international arrivals to Australia are immediately encouraged to pick a footy team. Once they have spent enough time in offices, on building sites, in hospitals and schools, or on Zoom calls, they understand why: being able to engage in footy talk is as vital to smooth social passage in Australia as their passport is for getting here.

Dawe’s poem demonstrates why this is the case: from birth, wrapped in a coloured scarf that has no meaning for them, kids are encouraged to barrack – carn, carn – and get excited about what their parents and family are passionate about. They move onto, in those days, being shouldered above crowds standing at suburban or country grounds so they can see their warriors clad in those colours, clashing on the field. They learn who are their lifetime heroes and enemies, and they discover what the Victorian city of Geelong’s economy knows only too well: it’s boom or bust depending on your club’s fortunes. And, as they grow much older but not wearier, there remains the hope that, this year, they can die happy, having seen the premiership cup held aloft at their home ground. 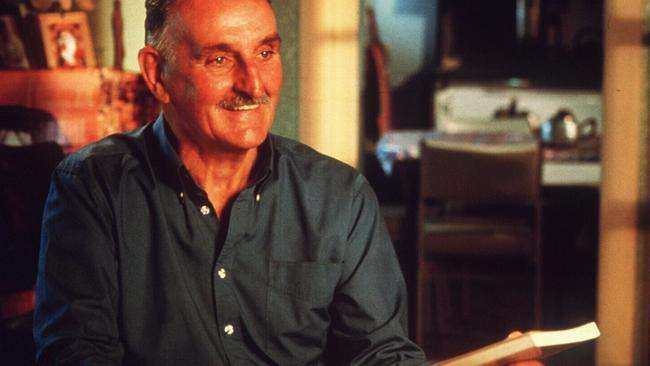 Life Cycle tells Australians they should not be ashamed of their passion for footy. However, through humorous religious imagery and also mythological and military motifs, Dawe, a Catholic, reminds readers that the AFL is just a game. The poem also goes deeper and shows how the Australian passion for footy has the effect of bringing people in touch with the value of hope. In a nation that is simultaneously ancient and youthful, this value will remain a vital cog in the mechanics of our continually evolving national identity. The AFL will continue to unite new generations of Australians grappling with what it means, in the words of our revised national anthem, to be “one and free.”

Australia is one of the few nations on earth that has invented its own sport. It is one of even fewer, perhaps the only country, that can bring 100,000 people to that sport’s final. Understanding Australians’ passion for footy is central to understanding a large slice of what constitutes the Australian way of life, even our national identity. Dawe’s Life Cycle provides that understanding in poetic form.

Although it is one of his most popular poems, critics argue Life Cycle is not his best and many would consider anti-war works such as ‘Homecoming’ as more significant. But it is now a quintessential part of the Australian identity and national myth. With a recent recorded reading by legendary songwriter Paul Kelly, Life Cycle is developing a folkloric place of its own in our culture, even as it describes footy’s place in the national folklore.

You won’t learn much about the physical mechanics of the game from the poem, but footy mad Australians will see reflected in the words their life and passions. Those unfamiliar with the game can take from the poem a deeper understanding of the national psyche, one alive to resilience in the face of suffering with eyes full of hope:

‘That passion persisting, like a race-memory, through the welter of seasons,
enabling old-timers by boundary fences to dream of resurgent lions
and centaur-figures from the past to replenish continually the present’

Dawe speaks to the ongoing contribution of the game to the Australian way of life in the last few lines of the poem:

This appreciation of Life Cycle was authored by Melbourne writer and academic Heath Remington, in 2022, specifically for The Genius of Australia.