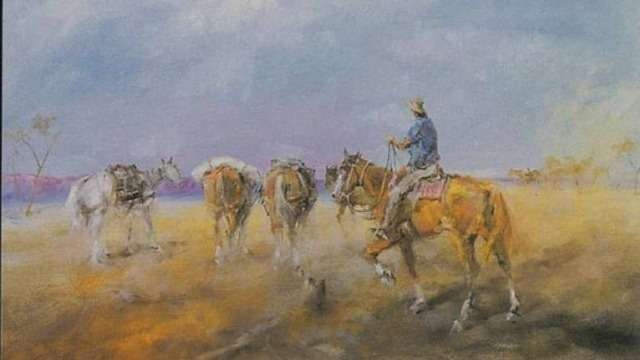 The Australian Legend argued that the dominant factor in Australians conception of themselves was the bushman of the outback. The ideals and mores of this true Australian were then reflected positively in other key aspects of Australian society, from unionists in the Labor Party to diggers at Gallipoli. It did not matter how urbanised Australia had become; its national identity retained the characteristics of the practical, taciturn bushman.

Ward described the archetypal Australian as:

‘A practical man, rough and ready in his manners and quick to decry any appearance of affectation in others … a great improvisor, ever willing to ‘have a go’ at anything … though capable of great exertion in an emergency, he normally feels no impulse to work hard without good cause. He swears hard and consistently, gambles heavily and often, and drinks deeply on occasion.’

Ward himself was very much a product of the cities, continuing a pattern of urban activists promoting the bush legend, exemplified by the ‘bushman’s bible’, The Bulletin, being published in Sydney. One of Australia’s most astute historians, John Hirst, argued that Ward’s own life partially contradicted his thesis, for Ward’s discovery of the legendary Australian did not occur until he was around the age of 30, at which time he then projected his discovery onto the nation ‘and backdated it to the 1890s’. However, despite this, Hirst also argued that Ward had a ‘claim to greatness’ for having written The Australian Legend and observed that ‘the book has survived all its critics’.

This comment from Hirst is a reference to the fact that Ward’s work has been the subject of sustained attack by successive waves of modern left-wing historians who found the bushman idyll both too blokey and too positive. The Australian Legend first came under serious assault from New Left historian, Humphrey McQueen, in the late 1960s and it was not only the substance of McQueen’s attack which changed Australian historiography but the manner of its delivery. When Ward responded to McQueen, he raised the harsh rhetoric which had been used against him and hoped that ‘some sense of group solidarity with one’s fellow historians should help us disagree without rancour and to debate without sneering’. It was a forlorn hope.

The New Left of the late 1960s, and their various left-wing successors have abided less and less by civilised norms. Where Ward and his generation expected debate, the next generation believed in shouting down those with whom they disagreed, while the generation after that decided that rather than shouting down, they should entirely de-platform those with a contrary view. 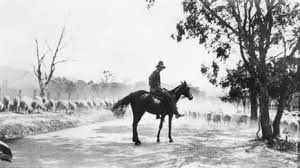 The crime Ward and his other Old Left historian colleagues had committed was, according to one critic, to display a case of ‘frozen marxism’ which ‘made them unable to grasp the centrality of race and gender to the perpetuation of ruling class power’. Ward was indeed a Marxist yet, in 1964, when he wrote a short history of Australia, he began it with the opening line which surely today would be regarded as irredeemably racist and sexist – ‘If we except Antarctica, the Australian continent was probably the last to be occupied by man and certainly the last to be discovered by civilized people’.

In The Australian Legend, Ward acknowledged that there was cruelty to the Indigenous population on the frontier. However, there was no suggestion that the ex-convicts and currency lads who took possession of these lands were to be condemned for doing so. Indeed, a striking theme of the work is that the emancipists and the native-born whites were uniquely entitled to occupation of the land. In fact, this entitlement extended to scepticism about whether there was a legitimate place for free immigrants, who began arriving in greater numbers from the 1830s onwards. Ward quoted a wealthy emancipist affirming that the colony was founded for convicts and querying what right free immigrants had to share in the spoils. As Ward commented: ‘Not only prisoners and emancipists, but currency lads and poor settlers generally shared in the conviction that the new land belonged, morally, to them’.

Ward argued that it was easier for people of Irish background to form an attachment to the new land as they did not have the divided loyalties of the British immigrant who still hankered more for ‘home’, adding that ‘no man, except a Currency Lad, could be more truly Australian than a working-class Irish convict’. Ward observed that colonial Australia’s lack of a middle class gave ‘disproportionate weight’ to the lower classes to influence the development of the national identity. This identity included a strong strain of anti-authoritarianism which provoked sympathy for bushrangers and opposition to license fees for gold miners. In turn, this meant that Ward was critical of the attitude of some prominent mid-nineteenth century figures such as W.C. Wentworth, J.D. Lang and Charles Harpur, for trying to create a different identity for Australia which was too middle class and too British.

Ward observed that there was a form of natural selection which meant that those whom he regarded as the best people chose to head to the bush, whereas ‘the staid, the timid or the vicious’ preferred to remain near Sydney. And when the colonists headed to the bush, ‘pioneering conditions’ meant that ‘their psychological acceptance of an inferior position in society disappeared along with the abject poverty which in Britain had helped to condition these traits’. 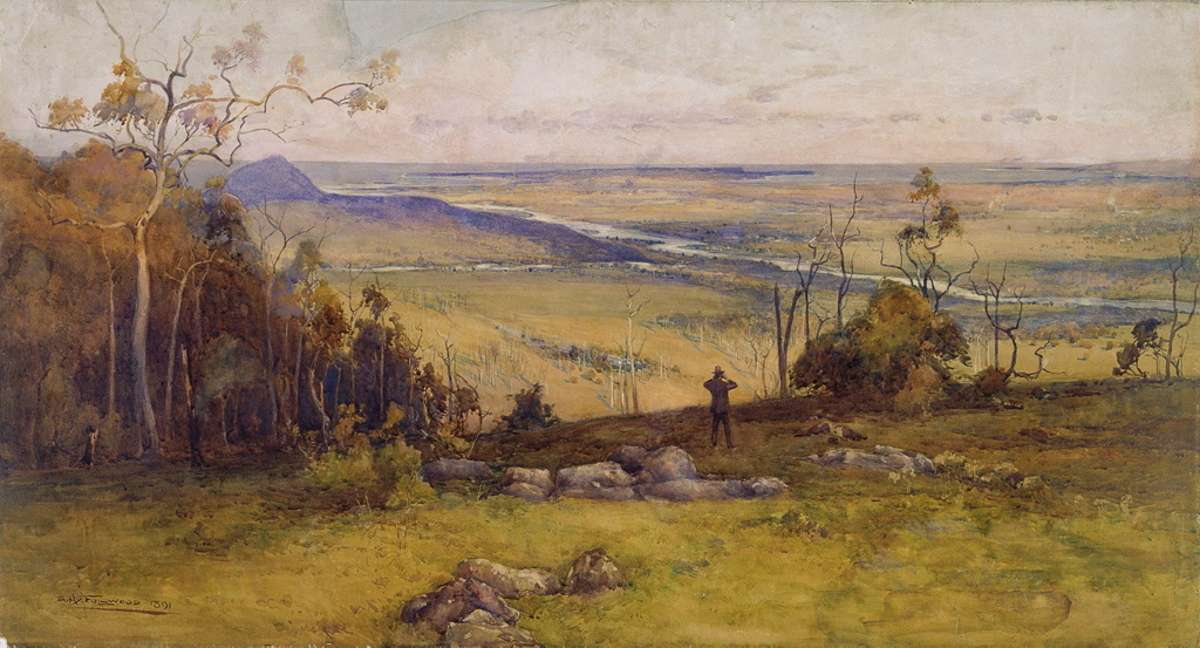 While abandoning some conventional norms such as deference to one’s ‘betters’, the emancipists and currency lads developed their own moral code which included generosity to any travellers who happened to pass by their property. Squatters being more likely than selectors to follow this practice was one reason that Ward did not subscribe to the cliché that squatters were bad, and selectors were good. He pointed out that, for the itinerant bushmen, squatters were better in another way too, as they could afford to employ them, whereas the selectors tried to do everything themselves, in the process becoming in the bushmen’s eyes ‘a byword for meanness and stupidity’.

Most writers about Australian history accord significance in the development of nationhood to the Gold Rush and Federation but Ward saw aspects which both nurtured and restricted the developing national identity. Ward argued that the Gold Rush did not help the development of ‘the Australian mystique’ and, in fact, ‘if anything, it had the overall effect of delaying the emergence into full consciousness of the national legend’. Similarly, to Ward’s regret, Federation, while strongly supported by those in the outback, resulted in a reduction in the Anglophobe, republican and separatist facets of nineteenth century Australia, although still leaving the legend of those times intact.

Ward acknowledged that the Gold Rush had a major impact on the country’s politics and economics and, more significantly for his thesis, it helped to spread an egalitarian ethos. This was greatly helped by the fact that manual labourers had an advantage on the diggings over those from middle class backgrounds. As Ward observed:

‘The levelling tendencies in society were even stronger than before the gold discoveries. Moreover, the obliteration of class barriers, inseparable from life on the actual diggings, and the constant coming and going between the fields and colonial capitals, both tended to spread the egalitarian outlook more rapidly outward from the ‘nomad tribe’ and upward through the middle classes.’

The striking egalitarianism of the bushmen of the outback was notable for the absence of any ‘offensive intrusiveness’ about others’ origins, creating a new outlook which only judged people on how they behaved in the present. Of course, the modern-day critic would argue that this was an egalitarianism purely of white men. However, while this society might not measure up to modern-day standards on race and gender, it had many attractive features which modern historians, on a mission to find fault with the past, fail to acknowledge.

For an Old Left historian such as Ward, one of those attractive features was a more collectivist outlook on the Australian frontier than that which prevailed in America at the same time. The Australian Legend includes a chapter which considers American historian F.J. Turner’s famous 1893 lecture which espoused a ‘frontier theory’ and argued that the moving frontier was the crucial factor in developing the national characteristics of the United States. Ward saw similarities in the impact on nascent nationalism in both countries but differences in how the two frontiers affected the form of both countries’ democracy, concluding that ‘differing frontiers in the United States and Australia produced two very different types of frontiersmen, with mental attitudes that were very similar in some respects but very different in others.’

Ward’s interpretation of Australian history had some flaws, just as there were flaws in the outlook of the Australians he sought to glorify. However, when one considers much of the verbose and ill-formed commentary on Australia’s past that contemporary society encourages, there is something glorious about a passage which Ward quoted from fellow Old Left historian, Brian Fitzpatrick describing the bushman style. This explained that ‘utterance is better not done at all: but, if it is done, it were well it was done slowly and flatly and expressionlessly, to betoken that the subject, any subject, is hardly worth talking about’.

The Australia which Ward celebrated had quite a lot to commend it. To understand it, The Australian Legend remains essential reading.

This article by IPA Senior Fellow, Richard Allsop, originally appeared in the Autumn 2021 edition of the IPA Review.