The Getting of Wisdom 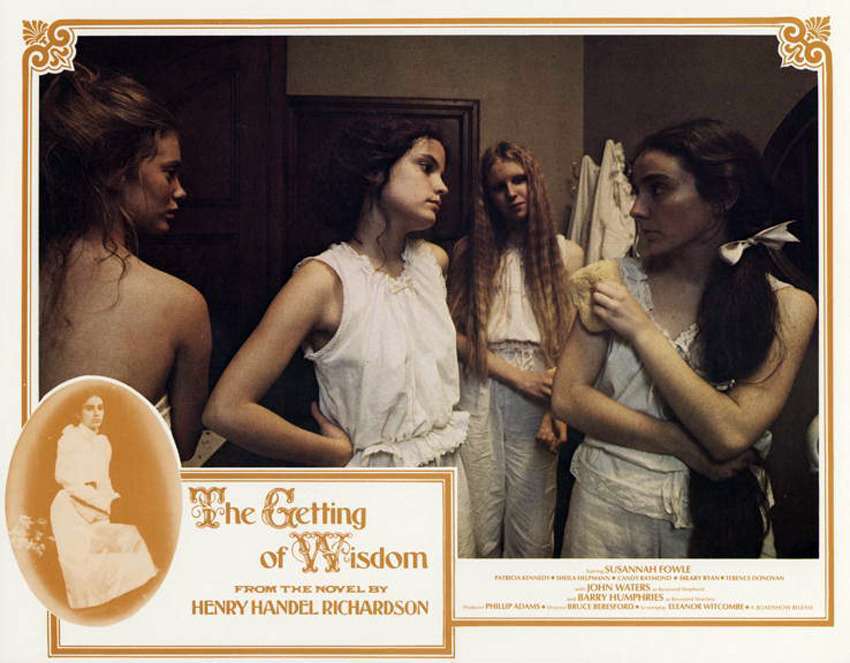 The Getting of Wisdom is one of the finest books to come out of Australia and it’s characteristic of it that it should insinuate itself so quietly into Australian literature. This is Richardson’s school book, the story of Laura Ramsbotham and the world of confusions and self-consciousness that she finds herself in when she becomes a boarder at a school which is discernibly based on Australia’s Presbyterian Ladies’ College, PLC as it’s always called. The Getting of Wisdom is arguably Richards’ finest work, a flawless jewel of a novel, something that will bear comparison with James Joyce’s A Portrait of the Artist as a Young Man or Alain Fourier’s Le Grand Meaulnes, a flawless work that is only minor because of the power with which it realizes what seems like a miniature thing. The jots and tittles of a particular uneventful stretch of life in which a young girl grows (or fails to) along the way to womanhood. The author’s real name was Ethel Florence Lindsey Richardson and she is a complex figure in Australian literature because her epic novel The Fortunes of Richard Mahony is the huge masterwork which influenced Patrick White and gives evidence of the massiveness of Richardson’s ambition. The Fortunes of Richard Mahony is the complex and fractured portrait of a man of great fineness who gradually goes to pieces in the context of colonial Australia. It’s an utterly uncompromising image of madness and frailty, of a woman’s love and of a man of heroic qualities who seems to disintegrate body and soul as the novel unfolds. It is also in a curious way, not uncharacteristic of some of the summits of Australian writing, a belated book. It is the great panoramic novel of 19th century Australian life yet it wasn’t published until 1930 so that it has that curious quality you get in the fiction of Edith Wharton (for whom Henry James remained a touchstone) of not quite belonging to its literary moment. This is put by Germaine Greer in her bracing way when she says that Mahony uses ‘a convention that was lifeless by the turn of the century’ and that the hero cannot bear the weight that is placed on him.

Greer’s critique of the naturalism Richardson uses in Mahony is based on an evolutionary notion of literary form and it’s interesting that Patrick White who was influenced by Richard Mahony in fact exploits conventions, notably dramatic ones, that hark back to Hardy and he can be accused of the grandiosity that Greer dislikes in Richardson and which she sees as her besetting vice: hence the nom de plume Henry Handel as if she needed a name that recalled the Hallelujah chorus.

The Getting of Wisdom (1910) has none of this. It is a tossed-off glory of a book because it so intensely inhabits a world of panting female adolescence and all its attendant frailties and insecurities, its flirting and its fibbing. Richardson herself declared that her heroine, ‘by dint of sad experience…discovered unaided the craft of realistic fiction.’ This declaration in the Virginia Quarterly Review in 1940 by the woman who was nominated for the Nobel Prize is dealt with scathingly by Greer who says that:

‘Laura’s art is simply that of being an effective liar: she invents what could have happened, but which did not.’

This is a fair enough definition of the kind of probability that must govern all writing of literary merit and in its plainness has essential pertinence for the swift and sparkling, the crisp and ruthless realism, of The Getting of Wisdom.

None of which is meant to deny the fact that Germaine Greer’s introduction to The Getting of Wisdom – which remains the Text Classic introduction – is the finest thing that has ever been written about the book. She captures the steaminess and yearning of this sustained picture of ordinary life among schoolgirls which Laura learns to negotiate and endure and withstand. It leads her to write one of the finest critical sentences that has ever been written of Henry Handel Richardson or anyone else.

‘Sexual tension tightens every page of The Getting of Wisdom, if not as subtly as it does every page of a novel by Jane Austen, yet with a stimulating degree of restraint.’

PLC in Richardson’s hands becomes a hothouse of locked up girls, complacent and boy crazy and later of the crushes on other girls which are done with a heartbreaking power of delineation. And then there is the remarkable annunciation of one Miss Hicks the fly by night teacher. This is the famous dismissal of feminine sensibility and feminine uninterest in intellectual matters of any kind or indeed of any self-possessed intelligence. It is an anti-feminist jeremiad which at the same time proffers a devastating critique of complacent womanliness.

‘…You’re blessed with a real woman’s brain: vague, slippery, inexact, interested only in the personal aspect of a thing. You can’t concentrate your thoughts, and, worst of all, you’ve no curiosity – about anything that really matters. You take all the great facts of existence on trust – just as a hen does – and I’ve no doubt you’ll go on contentedly, til the end of your days, without ever knowing why the ocean has tides, and what causes the seasons. It makes me ashamed to belong to the same sex.’

And poor Laura finds herself assailed at every turn and realizes the aptness of the critique and takes it to heart as if she alone bore the brunt of it, that creepy but universal feeling that overtakes adolescents when they hear a condemnation from an adult that they are the naked target of the rage and its justification. Not for Laura, Byron’s ‘man’s love is of man’s life a thing apart; tis woman’s whole existence.’

‘Vague, slippery, inexact, interest only in the personal! Every word struck home. Had Miss Hicks set out to describe her, in particular, she could not have done it more accurately. It was but too true, she, until now, Laura, had been satisfied to know things in a slipslop, razzle-dazzle way, to know them anyhow, as it best suited herself. She had never set to work to master a subject, to make it her own, in every detail. Bits of it, picturesque scraps, striking features – what Miss Hicks no doubt meant by the personal – were all that had attracted her… But if this were so, if she were forced to make these galling admissions, then it was clear her cleverness had never existed except in mother’s imagination. Or, at any rate, it had crumbled to pieces like a lump of earth, under the hard, heavy hand of Miss Hicks… She did not want to have a woman’s brain, thank you; not one of that sort; and she smarted for the whole class.’

This is wonderful stuff because Miss Hicks’ words are so vituperative, so cruel, and yet they capture just what so many women have loathed about a world that doesn’t care what they think, not least because it doesn’t believe that they can. And Laura, partly to her credit and partly because she is vulnerable to every potential humiliation because she doesn’t know who she is and what can be expected of her – takes it absolutely to heart.

The Getting of Wisdom doesn’t have the variegated brilliance of surface and tone of Joyce’s Portrait of the Artist but in staying so close to Laura’s sensibility as well as her blindly emerging sense, it has the intentness and credibility of the fact that the central figure doesn’t have to take wing like Dedalus, she doesn’t have to go from being sweet and innocent to being a towering pain. Think of the cadence of that biblical epigraph. The notion that only wisdom matters and that its companion and begetter understanding is at the heart of this extraordinary book, takes an ordinary girl – sweet and sloppy and suffering – and shows the fullness of her frailty and the passion she has to get somewhere and to understand, as Manning Clark used to say, what it’s all been about. 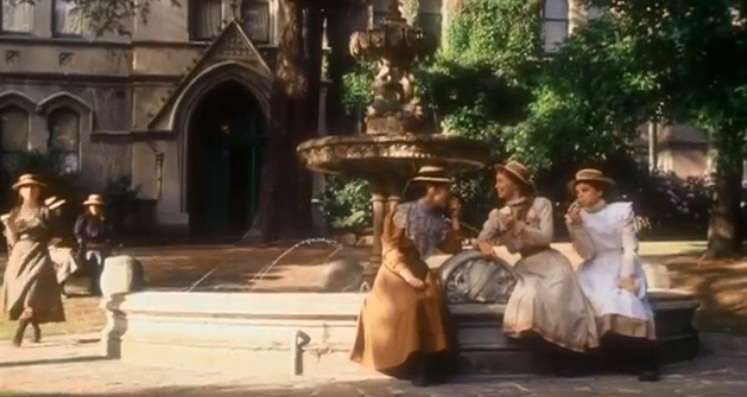 The Getting of Wisdom has a place in any canon of Australian literature, however aesthetically rigorous. It was filmed by Bruce Beresford in 1977 who also once wrote a film script of The Fortunes of Richard Mahony. It is also a natural for the IPA’s canon because it shows a very sympathetic but not sentimentalized young girl in the hothouse environment of a posh school. She learns to get by, sometimes sneakily, sometimes seductively, or unfeelingly. But it’s a novel which shows someone from a socially marginal background – not a rare thing in Australia – and shows how she copes with a world that seems accommodating but has its own savagery. It is in its way a dire portrait of the education it delineates, and PLC made it clear that Henry Handel Richardson was not welcome to visit the school. It is as Germaine Greer said, a portrait of an ordinary girl who is precious because she is ordinary.

From that point of view, it is a deeply democratic novel, a novel about the egalitarianism of suffering and wisdom and understanding, get them where you can. It is, in its ambivalent, sidelong way, a feminist novel. It shows, after all, what a tough woman would say about what was wrong with the contemporary content of what girls’ brains were stuffed with.

This is a literary classic which is also an illuminating account of late nineteenth century girlhood set in the 1880s. It shows, note by note, how a girl from a far from privileged background could aspire to write a grand epic like Richard Mahony and in fact wrote a different kind of masterpiece while hardly noticing it.