The Harp in the South 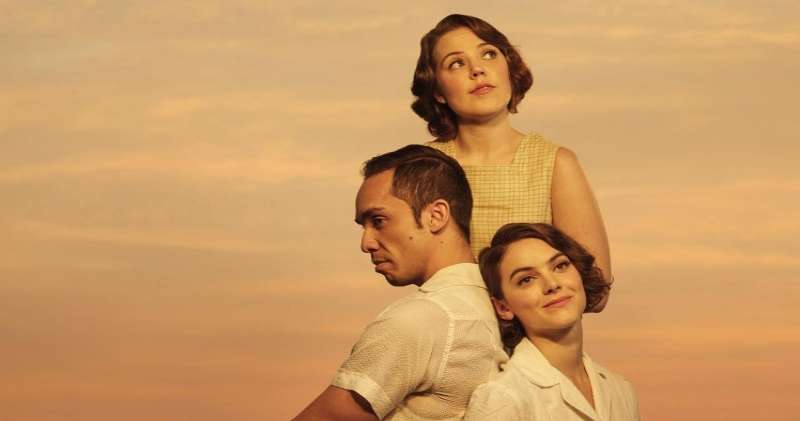 Now a bestselling Australian classic, The Harp in the South was hastily written in just six weeks by author Ruth Park at her parent’s kitchen table with two young children underfoot. It is conspicuously Australian, deeply empathetic and provides a unique insight into life in the slums of Surry Hills. The ordinary problems of the Irish-Australian Darcy’s bring into focus the wiry endurance and the larrikin touch which is so central to the Australian way of life.

Within the first pages the reader meets the residents of 12.5 Plymouth Street: Mumma Darcy, her alcoholic husband Hughie Darcy and their two daughters Roie and Dolour. Central to the story is the loss of of a middle son Thady who disappeared from the streets aged 6. The incident had a lasting impact on both parents and is the emotional key to the story. The squalor and poverty in which the family live is fully drawn out by Park alongside the centrality of family and community. The Harp in the South sends a clear social message about the dangers of poverty to human health and potential and simultaneously paints a warm, down-to-earth, and often comedic portrait of slum life.

Taboo topics such as abortion, motherhood, marriage, childbirth, and sex are explored through the story of Roie. She falls pregnant, plans a risky abortion, loses her child by accident but goes on to enjoy a loving marriage. Park’s non-judgemental treatment of these topics breaks with the standard narrative of the time which often saw moral failure met with retribution. Both sisters represent the indomitable Australian spirit. Dolour is smart, robust, and hopeful and even in the face of tragedy Roie’s inner goodness remains. The story ends when Mumma is visited by the spirit of Thady and is finally able to find peace as she realises he died long ago. Her final words: ‘I was thinking of how lucky we are.’

The literary world is the world of the educated elite – a select group of people – who see the world through a lens that has been influenced by their education. Ruth Park’s greatness lies in her ability to represent the world of the uneducated battler with startling clarity and insight. The reader is told that Roie and Tommy, ‘wanted to say words that were not crude and banal, but their imaginations fell flat, unsupported by education and intuition.’ But Park steps into the shoes of these people and gives voice to the voiceless. She provides a dignifying and nuanced critique of poverty that acknowledges the way in which hardship strengthens even as it limits.

‘In her peasant soul Mumma thought how strange it was. Her thoughts did not have words, and her pity did not even have thought. For the first time she felt equal and even superior to these people with the riches and the wisdoms of the world, who did not know even the simplicities she had been born knowing.’

Here Park speaks to the intuition and strength which exists among less educated communities, but which cannot be easily articulated. She writes with the familiarity of one who lived in Surry Hills before it became the trendy suburb it is today. In her autobiography, Fishing in the Styx, Park shared how she shared a single bed with her husband in an old shop in Surrey Hills while his brother slept downstairs. Her working-class childhood and immersion in the area she is writing about lend credibility to the novel.

The Harp in the South is one of the most beloved books in the Australian literary canon because it looks beyond Australia’s unique flora and fauna and sunny beaches to forge a national type based on the rough and tough Irish settlers. While much of the Australian literary tradition is bound up in the rugged bush men and women, the nation ultimately has one of the most urbanised populations in the world. Park’s novel speaks to the immigrant, to the city dweller and to suburban Australia. The importance of Christian values also plays a role. The Catholic church embodies the dignity of a spiritual reality that contrasts strongly with the impoverished life led by the family. Father Cooley and Sister Theophilus and Beatrix exemplify sacrifice and charity at its best and remind the reader that meaning is not found in the material world.

By embracing the darker side of Australian history, Park made a stark break with the enthusiastic nationalistic literature of the time which presented the newborn nation as the land of opportunity. In fact, the story of Dolour questions the narrative that hard work will always lead to a better life. Despite her plans to excel at school and study hard, Dolour’s eye problems and background, may stand in the way of her best intentions. Park also asks difficult questions about class, race and gender. Within the Darcy family’s orbit are lodgers Miss Sheily, her retarded son Johnny and Protestant lodger Patrick Diamond who is also Hughie’s best friend. Chinese immigrant Lick Jimmy’s arrival in the neighbourhood also creates a stir while Roie’s husband, Charlie Rothe, has indigenous heritage and his ‘blood’ is an issue for Mumma at first:

‘It’s because there’s nigger in him, Hughie. I’m scared of it, and no mistake.’

‘Hughie said defiantly: ‘It’s better than Chink. It’s real Australian and no matter how bad it is, there’s none better.’

Both parents overcome their concerns and accept Charlie, pointing to a tolerance for difference that goes deeper than surface racism and which is central to the Australian way of life today. Modern Australia is multicultural and multiracial. The discussions about race, class and gender in The Harp in the South promote unity and equality. The egalitarian Australian spirit shines through.

The Harp in the South was written in 1946 just after the end of WW2. The impetus for the novel was a competition launched by the Sydney Morning Herald to stimulate the development of art and literature. For struggling authors Ruth Park and her husband, the £2,000 prize for first place and guarantee of publication was an almost unimaginable outcome. In her autobiography, Fishing in the Styx, Ruth Park recounts how she first urged her husband D’Arcy Niland to enter. However, it was Park, aged 28, who wrote her first novel which was submitted under the nom de plume Hesperus because she ‘felt like a wreck’. Her win was celebrated amid great fanfare and controversy in the literary world and Australian public.

The Sydney Morning Herald released the story in serialised form and made the most of the situation, publishing the most vehement opinions. One unhappy reader wrote, ‘If the story was really written by a woman, then I am very sorry, for it destroys all the nice things I have believed about women’s minds.’ While another continued, ‘I have five nieces and I am sure I should not like to give them this story to read’. Even the publishers, Angus and Robertson, informed Park, ‘It’s not the kind of book A & R cares to publish but we have a gentlemen’s agreement with the Herald.’ Most praised but many condemned the failure of characters to live up to social expectations and norms which no longer prevail in 21st century Australia. The critical reaction was also mixed. The realism and authenticity of the novel was commended while the lack of plot or central hero were denounced. Arguably, detracting from the latter would also detract from the former. The apparent randomness of the narrative contributes to the overall believability of the characters.

Despite its rough entrance to the literary scene, The Harp in the South has stood the test of time and has never been out of print since it was first published. It is a story that is at once terrible and wonderful and uniquely Australian. In a review which accompanied the novel’s release, war poet Shawn O’Leary wrote that the novel ‘bludgeons the reader about the brain, the heart, and the conscience’. It continues to do so, speaking to the human condition, no matter how impoverished it may be.

This appreciation of The Harp in the South was written by IPA Researcher, Brianna McKee, in 2022, specifically for The Genius of Australia.