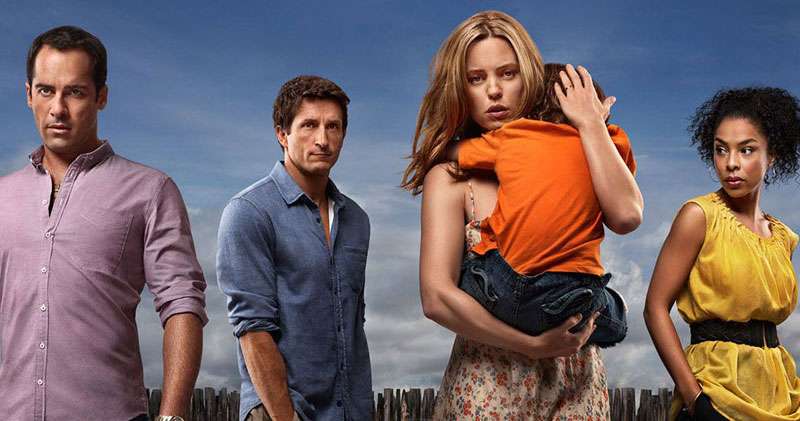 The Slap is full of swearing. As Danielle Williams, the Book Club Leader at the Sydney Writers’ Centre, advised potential readers ‘if you’re easily offended by swearing (and real swearing!) then this isn’t for you’. She explained that most of her own book group found it ‘too much’, and personally could not believe that people used, or even thought, the ‘c word’ that often. Enough of the swearing was retained in the television series to offend a whole new cohort of the easily offended.

However, those turned off by the swearing might have been surprised to learn that his own offence at hearing swearing was one of the key motivations for Christos Tsiolkas writing The Slap in the first place. He has described travelling on a morning train into the city on which ‘a group of adolescent boys were swearing their heads off, seemingly unconcerned about the effect this was having on an elderly lady sitting behind them’. Tsiolkas intervened and, unsurprisingly, copped a torrent of abuse himself and, as he acknowledged, all he had achieved ‘was to increase the elderly woman’s discomfort’. In his fury, he wanted to slap the yobs, but the incident also got him thinking about ‘how was it that these young men had not been taught one of the basic universals of human culture, respect for our elders?’

Now, when I was hanging around the same university campus as Tsiolkas in the 1980s, ‘respect for our elders’ was never one of the key demands of the on-campus left of which he was a prominent member. Still, there’s nothing like progressing from one’s 20s to one’s 40s to admit that one’s earlier radicalism may have had a few downsides.

Yet, that does not seem to be Tsiolkas’ view. In his eyes, the main culprit in the loss of respect for our elders is not the lefty members of the ‘hope I die before I get old’ generation, but, you guessed it, John Howard.

Interviewed by Geraldine Dougue on Compass, Tsiolkas explained that his book ‘was written during the Howard years…it was written at a time when we became the richest and fattest we’ve ever been and I think we’ve also lost our kindness’. According to Tsiolkas, he particularly wanted to set the book in the ‘Howard years, and the affluent world of the aspirational class’ and, just to remind you, these were the years which saw us ‘become less generous’, and ‘lose some of our so-called ‘‘Australian egalitarianism’”.

Yet it is hard to see how aspiring in the 50s and 60s for a quarter-acre block, with a black and white TV and a Holden in the drive was that much different from the unkind, ungenerous, inegalitarian aspirationals of the dreaded Howard years striving for a McMansion, plasma TV and a four wheel drive. And wasn’t the supposed materialism of that earlier generation of parents a key part of what the Baby Boomers rebelled against when they dropped out and got stoned from about 1967 onwards?

Apparently not. No, materialism and aspiration, like every other social ill, began with the election of John Howard in 1996. One could point out the strange paradox that at most two of the leading characters in The Slap could even conceivably be Liberal voters, but somehow the new materialism has affected them all.

And, of course, there is the more basic paradox that if part of your aim in life is stop youth swearing within earshot of old ladies on the train, then it is a little perplexing to understand how the profanity free zone that is the public face of John Howard is more of a culprit than the author of a book and TV show that is full of the stuff.

Ah, but these politicians have their wily ways of exuding influence, as the dying father of Tsiolkas’ teenage character Connie explained in a letter from London to Melbourne asking Connie’s aunt to take her in:

“They are fucking cruel this young mob, very very much the children of Thatcher, even though they might mouth all the right ecological and anti-racist platitudes. They have little time for anyone who is not capable, for whatever reason, of being successful.”

So, it seems that Howard and Thatcher have not only made us all lose respect for our elders but corrupted the young too.

And the elderly are worthy of respect. When asked if he liked any of his characters, Tsiolkas nominated the elderly Greek man, Manolis, father of Hector, whose 40th birthday BBQ caused all the problems. Tsiolkas has explained that he likes Manolis ‘because he has a sense of honour’ and elaborated:

“For a long time, I didn’t think that honour was an important thing. I thought it was an old-fashioned, traditional, conservative value. But I think I actually was running away from the very word itself. And I think honour is also about acknowledging your fortune”

Tsiolkas was probably right the first time and honour is an ‘old-fashioned, traditional, conservative value’, especially as Manolis himself has a pretty conservative world-view on what has gone wrong:

“He too had thought this for a long time, that the abandonment of respect for the aged was an indication of moral emptiness and materialism. He was not so sure now. He wondered if the youth had a father… When there was no father one did not learn respect… they had no fathers and they had not learned the meaning of honour, of respect.”

I look forward to seeing a future debate between Tsiolkas and a feminist about the need for children to have fathers. John Howard used to be ridiculed on the basis that he wanted a return to the social values of the 1950s, but paradoxically those conservative values are OK if, in the 1950s, you were a Greek migrant in Richmond. It smacks of the modern common occurrence of the left, who used to attend demonstrations and attempt to drown out speakers with whom they disagreed, now bemoaning the lack of civility in political discourse, without any acknowledgement that they may have contributed to the problem.

Of course, none of these paradoxes detract from Tsiolkas’ creative achievement in writing The Slap and perhaps, more surprisingly, what the ABC achieved in bringing it to the small (or not so small if you are an ‘aspirational’ with a plasma) screen.

One salient observation Tsiolkas did make in interviews his hit generated was that ‘the “aspirational class” was wog as much as it was Anglo-Celtic, that it had working class as well as bourgeois roots’. He draws this out in many clever ways, exemplified by the fact that the slap itself occurred as the result of an incident in a game of cricket, hardly the most likely game to be played in a Greek immigrant backyard.

Then there is the character Bilal, who sounds like a caricature as an Aboriginal convert to Islam, but who actually presents a wonderful contrast to boozy no-hoper Gary. The social conservatism of Islam means that, as well as forsaking alcohol, Bilal is keen to buy a house in an outer suburb for his family, something faded radical Gary believes is outrageously bourgeois.

The Slap clearly worked as both a book and a television series-both are thoroughly absorbing-and the range of flaws in the characters made for powerful drama. Of course, one has to remember that stories require drama and the gulf between the parenting styles of Harry and Rosie is so large that the vast majority of readers and viewers would place themselves somewhere between the two. Very few parents are as indulgent as Rosie; very few react to bad behaviour from someone else’s child by delivering a slap to the face.

That is why, in all Tsiolkas’ interviews about his bestseller, the comment that stood out the most was this one:

“Really most parents I know they’re doing a terrific job, really. The fathers have a much more intimate relationship with their children than my father’s generation did. I think they are really looking after their kids.”

So, in Tsiolkas’ actual experience, parenting is getting better – hardly the message of the book. And given that there were plenty of swearing louts on trains in the 1970s and 1980s, it seems pretty clear that Tsiolkas is tilting at a straw man in his attempt to make a political point.

Tsiolkas’ characters certainly have plenty of flaws, but they are his own brilliant creation, not John Howard’s.

This commentary by IPA Research Fellow, Richard Allsop, originally appeared here, in the April 2012 edition of the IPA Review.