Australia Is Worth Fighting For

Let me start by saying a big thank you to all of you who listened to, shared, and engaged with the Australia’s Heartland with Tony Abbott podcast series. And I’d like to welcome those of you who have recently subscribed to receive updates from me about The Centre for the Australian Way of Life.

As most of you know, Australia’s Heartland with Tony Abbott was produced by The Centre, and the first season concluded in December last year. Because of your support the podcast series was a massive success and has been listened to more than 100,000 times.

This means that the communication of the values which define the Australian way of life – freedom, democracy, egalitarianism, and sacrifice – is reaching more Australians than ever before.

You can listen to all 16 episodes of Australia’s Heartland with Tony Abbott in your web browser here, or on YouTube, Spotify, or Apple Podcasts.

The overwhelming feedback from IPA members and supporters is that you would like to hear more insights and analysis from IPA Distinguished Fellow Tony Abbott – and I am delighted to let you know that Tony has generously committed to a second podcast series which is called Australia’s Future with Tony Abbott.

You can listen to the first episode which was recorded this week in your web browser here, or on YouTube, Spotify, or Apple Podcasts. The episodes will be recorded fortnightly and released on Tuesdays. 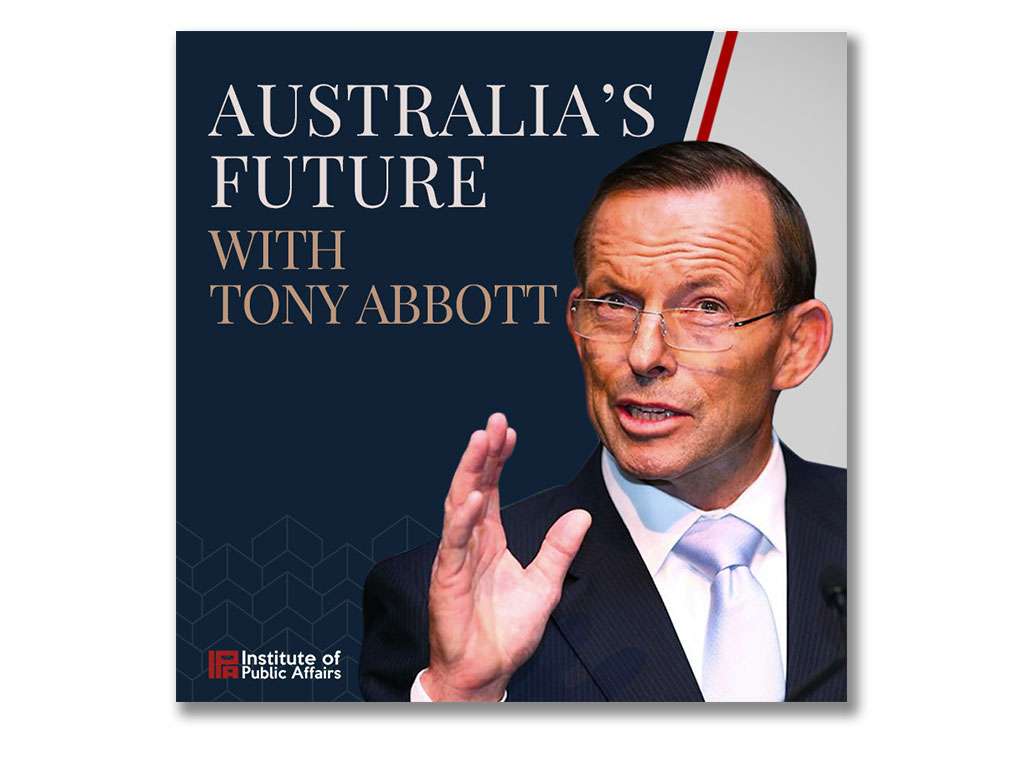 Reflecting on the first episode of our second podcast series, I am reminded again of how fortunate Australia is to have someone of the stature and caliber of Tony Abbott to share with us his insights and wisdom which have been the product of his decades of service to this nation.

This week Tony and I discussed a landmark survey released by the Institute of Public Affairs last week which asked: ‘if Australia were in the same position as Ukraine is now, would you stay and fight or leave the country?’ The results were deeply concerning, but perhaps not surprising.

Tony’s observations about what was primarily driving these results was spot on:

If you don’t believe in your country, you are hardly likely to fight for it, and it is a worry that young Australians, particularly school kids, are being fed a diet of intellectual poison.

Tony went on to argue that changes to the National Curriculum proposed by the Australian Curriculum, Assessment, and Reporting Authority (which have subsequently been abandoned) were ‘absolutely disastrous’, but the entire curriculum itself is rotten ‘because underlying every subject is a concept of national illegitimacy, a sense of environmental devastation, and of cultural inadequacy.’

The best thing we can do is not just play around the edges but tear the whole thing up [and replace it] on the basis of historical truth and academic rigor.

The historical truth of Australia that Tony was referring to is one of the unfurling of a nation that has become among the most free, democratic, egalitarian, and tolerant the world has ever seen.

The Australian people made pioneering and world-leading advances through, for example, the invention of the secret ballot in 1856, the implementation of The Church Act in 1836 which underpinned religious tolerance through the provision of equal funding for Catholic and Protestant denominations, and the 1967 referendum which established racial equality in the Constitution through removing divisive references to race.

And it is precisely these values that have seen millions of migrants flock to our shores for the prospect of a better life in a fair and tolerant society that Australia offers.

Yet rather than being told the truth about Australia’s history, students at schools and universities are told a one-sided, negative, self-hate view that Australia is a racist nation built on stolen land, and whose institutions are structurally oppressive.

But it isn’t just the education system that is the culprit. Many of the major institutions in our society – big business, civic organisations, and most sections of the media – promote a similar view.

Lachlan Murdoch, co-chairman of News Corp, and executive chairman and CEO of Fox Corporation, delivered an astute and powerful keynote speech at the official launch of The Centre for the Australian Way of Life last week, where he identified the failure of the elites to uphold Australian values as the singular threat to our way of life.

Lachlan said that his father believed the defining quality of Australia’s national character was ‘steeliness’ with ‘strong veins of optimism and self-reliance’.

That way of life, however, is under threat. As he said:

I am always saddened when elements of our citizenry, often the elites who have benefited most from our country, display not a love of our values but a disdain for them. This is why some of what sets Australia apart is under threat. Our core values, our successes and even our history are under constant attack.

That is exactly right.

Lachlan went on to note:

To listen to our national broadcaster or much of the media elite is to hear about a uniquely racist, selfish, slavish and monochromatic country. The reality could not be more different – we are one of the most tolerant, generous, independent and multicultural countries in human history…How can we expect people to defend the values, interests and sovereignty of this nation if we teach our children only our faults and none of our virtues?

As Lachlan concluded, all nations have imperfect histories, and Australia is not without fault, but we are without peer.

You can watch Lachlan’s full speech on YouTube here and you can read the speech here. You can also read Tony Abbott’s speech at the launch of The Centre here.

What Lachlan and Tony discussed, and what our survey results show, is that an institution which explicitly and unapologetically communicates and promotes the values which make Australia special – and worth fighting for – is needed now more than at any other time since World War II. And this is precisely why the Institute of Public Affairs established The Centre for the Australian Way of Life.

The aims of The Centre are to: provide the cultural and intellectual leadership required to maintain and enhance the Australian way of life; give voice to timeless Australian values; and educate young Australians about their own and their country’s history.

About the Author: Daniel Wild

Daniel Wild is the Director of Research at the Institute of Public Affairs
Published On: April 6, 2022Categories: Read, The Australian Way Newsletter