Crocodile Dundee was an immensely successful attempt to create an Australian hit movie, a residually comic depiction of a folk hero bushman who was at home in a world of crocodiles and snakes but could also do battle with the shadiness and sophistication of 80s Manhattan. It’s a sumptuously made film, very beautifully shot by the great Australian cinematographer Russell Boyd and it represents a very cunning adaptation of Paul Hogan, the tradie who turned overnight into a supremely popular comedian, into a protagonist who is all the more a master man of bush prowess, matchless with a fist, a knife, with any old object that could demonstrate his savvy as a bushman of supreme physical skills and he is also the idiot savant, the holy fool who wanders the Big Apple as if it were just another stretch of bush that would yield to the master tracker/he-man bush hero. It helps enormously that Paul Hogan has a wonderful star quality: he is a film natural, someone who takes the screen by an unsurpassable right of conquest because he appears to make no attempt to act, he is simply himself, in a way that has some kind of affinity in its dry, alert way, to the sort of magnetism you could get with John Wayne which was no impediment to John Ford using him in a masterpiece like The Searchers: Paul Hogan is the kind of performer who, to dislocate TS Eliot’s definition of a poem, doesn’t have to mean, he just has to be.

This makes him the histrionic rock on which Crocodile Dundee is built even though it’s Hogan’s defining quality to have nothing histrionic about him. The film was designed to be a massive popular success and it was made for $8.8 million Australian and ended up making $328 American. It topped the foreign film charts by a mile in America and was a runaway success in Australia for reasons that make abundant sense in terms of its sheer watchability.

The storyline is straightforward enough. American journalist Linda Kozlowski hears of the fabled bushman and she goes to the outback Northern Territory to meet Mick ‘Crocodile’ Dundee who she wants to write a story about. There is a long preparatory scene with John Meillon and that fine actor, playing a kind of manager or agent to Crocodile Dundee, is effectively nervy and a bit effete. Eventually, there is a grand encounter in a pub where she initially thinks a stuffed crocodile is the real thing. And there are all sorts of incidents featuring human and animal foes in which Crocodile Dundee’s powers are shown with masterly speed and with understated wry commentary. He’s not remotely vain, he’s just a hero. Kozlowski inevitably falls for him and her attraction is done with warmth and credibility. There’s also a bit of tastefully executed piety where Mick Dundee takes part in a pitjantjatjara ritual ceremony which features the famous indigenous actor David Gulpilil and allows the Crocodile King to show that he can kill a snake with no weapon but the balletics of bushlore of which he is a past master. 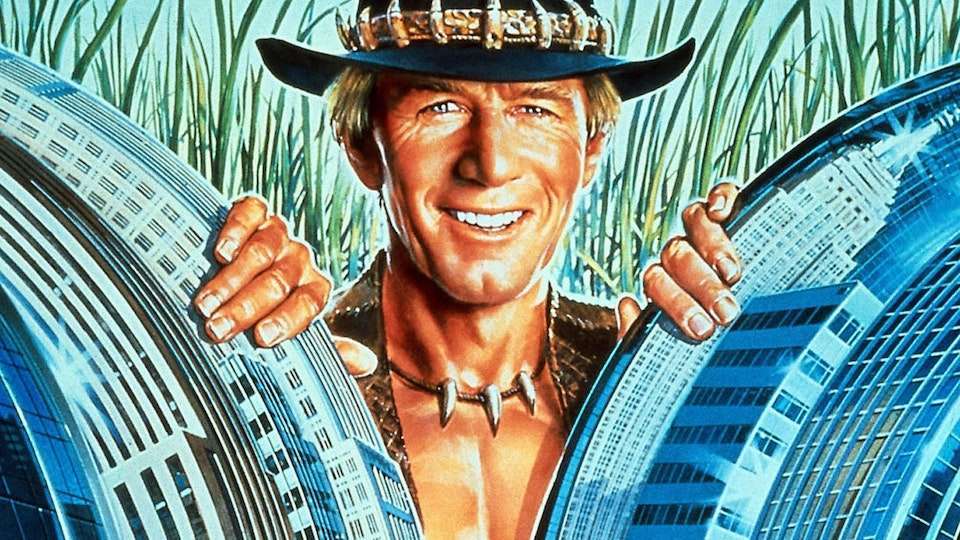 All of this is done with great skill and although the film is directed by Peter Faiman you can see the hand of Russell Boyd, the man who won the 2003 cinematography Oscar for Peter Weir’s Master and Commander with Russell Crowe. The couple nudging towards each other are often presented in darkness illumined by campfire and their not quite conscious love is presented innocently as it gradually kindles and the effect of this is to give credibility to their fondness and works subtly to belie the male/female schematics which are being deployed. It turns Crocodile Dundee into an offbeat romantic comedy of what remains a very traditional kind and you can sense like smoking eucalypts that this is going to warm hearts from Tasmania to Nebraska. The whole film in fact gives strong likable signs of transcending the formula by allowing the cliches of the convention to be humanized so thoroughly. And Crocodile Dundee is as its ambitions suggest a natural born family film not least because the archetypes behind it are so immemorial and the setting and the casting (which make perfect sense) are imaginatively realized in a way that’s a bit unexpected.

The second half of the movie where Mick ‘Crocodile’ Dundee and his feted lady love Linda Kozlowski go to New York is less successful though it will keep any audience going. We have to endure a moneyed slimebag proposing to Kozlowski – and she at first looks as if she’s going to go along with this – but the New York section is no match in terms of dramatic interest even though it’s the formal parallel in terms of dramatic symmetry to the moment when Crocodile Dundee rescues his beloved-to-be from a crocodile. But there are plenty of scenes like the one where he has to be told that a drag queen is a bloke as well as corny moments with crowded bars where the hero walks on top of the linked hands of his well-wishers rather than take a subway that can only lead to a walkabout through an urban wilderness that is liable to contain more enigmatic forms of indifference and unkindness than anything the world of snakes and crocs (those honourable foes because they have the faces and fangs of nature) can possibly pose. 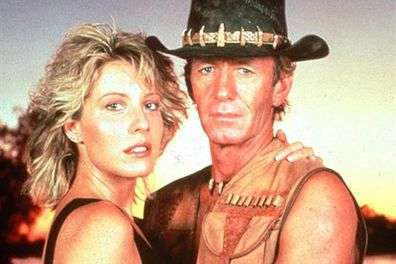 Crocodile Dundee is a noble savage, but he is also the idealization of the Australian bushman as a god in a world of manly virtue. Robert Hughes, that art critic with an eye to history and society, said the Americans imagined that Crocodile Dundee was a form of realism. Of course, it is a form of romance which like all the best romance wears the face and walks the walk of an imagined realism. Australians on planes or trains would open their mouths – never mind what level of management they occupied in Melbourne or Sydney commerce – to be regaled with joyous cries of recognition from their American interlocutors of ‘Crocodile Dundee!’ This seemed insulting to the Australians who didn’t like the ocker designation, but it was meant affably because the Americans were liable to be seeing them as noble kin because of the hardy bushmen their own country had come adrift from.

The IPA is interested in these matters because it is interested in books and films as clues to an Australian national character and way of life. Well, when Russell Ward wrote The Australian Legend he was fascinated by the way large numbers of Australians who lived in cities that hugged the shorelines could identify with the bush ethos of a statistically small group of pastoral workers and bushmen simply – though what’s simple about it? – because this typology dominated the representation of Australia in JF Archibald’s The Bulletin and in the contrasted images that nonetheless shared the terrain of the bush in the stories and poems of Henry Lawson and in the ballads of Banjo Patterson. It made sense of a kind because a dominion country far from the metropolitanism of London – even though the gold rushes established Melbourne as one of the richest and greatest cities of the New World, rivalling those of California – and if you see yourself as parochial in relation to the capital of an empire of which you are a part you might as well, it is liable to make fictional sense, if you present yourself in terms of a bush world of ‘sunlit plains extended’. Or in Lawson, where the most characteristic ritual is that of the union burying its dead or of a bush undertaker mouthing some half-recollected notion of a resurrection. Or indeed of a drover’s wife, tending her kids, fighting off snakes, her husband too far away. And when Ward argued that what he had done had sophisticated theoretical precedents he cited the American historian Francis Parkman’s view of the way in which the West and the people who had moved in those covered wagons of whom he wrote in The Oregon Trail (1847) and the way they had come to predominate in the American national consciousness.

The loftiness of the vision in John Ford’s Stagecoach or in the great elegy for Native Americans in Cheyenne Autumn came out of this American attempt at symbolic and substantively fictional self-characterisation and there had been a humble version of this in the Zane Grey novels and the early Hollywood Westerns. Crocodile Dundee produced by Hogan’s long term collaborator John Cornell, was a conscious attempt to invest in something like this territory and it was in its way a very artful attempt to put the bushman myth to work. The upshot could scarcely have been more successful but of course the agent of Australian understatement the kindness and the physical adeptness is not without real life examples. When Don’s Party was filmed Philip Adams had wanted Paul Hogan to play Cooley, the sex fiend lawyer and the clearest explanation of that is that he wanted Hogan’s effortless sense of presence, the confidence with which he occupies his own skin.

When Field Marshall Sir William Slim, sometime Governor General, said that he had seen every theatre of war and every conceivable sort of warriors “But never have I seen such men as the men of the ANZAC”, he was probably thinking of the real-life approximations to Crocodile Dundee.