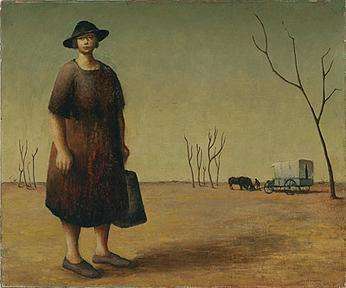 Poet and writer Henry Lawson explores the darker side of the Australian myth in his short story about a young mother living alone in the bush – The Drover’s Wife. Deeply gloomy in tone, Lawson paints a bleak but realistic picture of the challenges faced by early settlers. He draws out the way in which the harsh and unforgiving Australian wilderness has shaped the Australian way of life.

The Drover’s Wife is not a story about human flourishing but human survival. The mother at the centre of the tale has fought back fires, floods and illness by creatively adapting to new threats. She represents the many settlers who eked out a living in the outback and whose heroism lay in remaining alive. Hardship built resilience. Vulnerability built toughness. Isolation built resourcefulness. These qualities, which are central to the Australian way of life, are personified in the young mother. When one of her children yells ‘Snake! Mother, here’s a snake!’ she immediately rushes into danger. When the snake slips under the house, she waits up with her dog Alligator for the snake to re-emerge from a crack in the floor. While sitting up she reminisces about the difficult times she has experienced. These have ranged from dying livestock, to a mad bull, dealing with unwelcome strangers and the loss of a child. The woman is ‘used to being alone’ and has not heard from her husband in six months.

The theme of ‘man verses nature’ lies at the heart of The Drover’s Wife and contributes to the overall pessimism pervading the story. The woman and her children are holding the forces of nature arrayed against them at bay, but only just. All of their energy and time is focused on the ‘animalistic’ goal of survival. They have no time for leisure, learning or culture. While the mother has resigned herself to her lot in life, the desire for more is clearly there. She aspires to be more like the fashionable women in her lady’s magazine. She dreams of being more womanly although she is doing a man’s job. Here Lawson speaks to the broader question of what it is to be human as well as what it is to be Australian. The people who colonised this nation wanted something more from life. This is an ongoing part of the Australian dream which continues to draw migrants to our shores. While the natural environment has brought only trouble for this woman, for many others it brought prosperity, opportunity and freedom. The Australian way of life is tied to the nation’s distinctive landscape and natural resources. However, The Drover’s Wife is a clear reminder that triumph and failure always walk hand in hand.

Distance and isolation have been central to Australia’s history and national identity and continue to shape the present development of the country. From the beginning of the story Lawson draws out the implications of the vast unpopulated landscape that makes up most of Australia:

‘Bush all around – bush with no horizon, for the country is flat. No ranges in the distance. The bush consists of stunted, rotten native apple-trees. No undergrowth. Nothing to relieve the eye save the darker green of a few she-oaks which are sighing above the narrow, almost waterless creek. Nineteen miles to the nearest sign of civilisation – a shanty on the main road.’

Here Lawson is talking about ‘the tyranny of distance’, a term coined by History Professor Geoffrey Blainey who wrote a book about how distance – to and within Australia – played a key role in shaping the nation’s economy, society and political life. Whereas Blainey looks at how distance impacted the nation, Lawson looks at how distance impacted the individual. For the mother it means she lives without the benefit of community and is dependent upon non-human actors like Alligator her dog to stay alive.

Alligator and the mother’s triumph over the snake represents the triumph of humans over nature and reflects the ultimate success of Australian settlement in the bush. After the snake’s carcass is thrown into the fire, the mother cries silently as she watches it burn. Her son Tommy sees and promises to never become a drover. This exchange implies that the mother’s hard life and battles with nature will allow the next generation to build a better future for themselves. Despite the isolation, hardship and difficulty, Lawson offers a glimmer of hope that the toughened residents of the Australian bush will survive and flourish. His story of The Drover’s Wife explains how they developed the gritty qualities to do so. 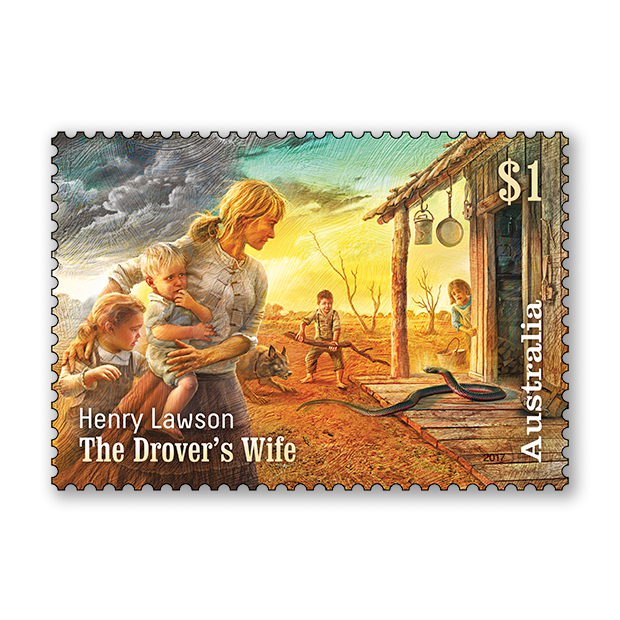 Lawson’s emphasis on the dark, melancholy and drab aspects of Australia contrasts strongly with the work of his contemporary and rival Banjo Paterson. The two poets were a classic pairing – as different as night and day – and the greatest Australian authors of the 90s. Where Lawson’s stories were pessimistic and desolating, Paterson’s works were uplifting and lighthearted. Discussing The Drover’s Wife with IPA Executive Director Scott Hargreaves, Australian literary critic Peter Craven said the short story was one of Lawson’s ‘very best’ along with The Union Buries Its Dead and The Bush Undertaker. Published in 1892, the book has inspired generations of Australian writers, painters, performers and photographers.

This appreciation of The Drover’s Wife was written by IPA Researcher, Brianna McKee, in 2022, specifically for The Genius of Australia.